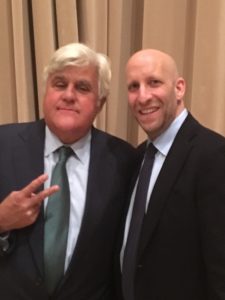 Comedy, Cars, Genius Fundraising…Jay Leno a true master of them all. Always an honor and privilege to work with such a nice man, Jay delivered a dynamite comedy set keeping the audience rolling in laughter as well as prior to his performance gave his magic touch the live auction portion of the evening and aided in giving our client’s fundraising initiatives a substantial boost from the attendees. Thank you Jay!!